The Cottage under the Powerlines

There are certain signs I simply cannot resist.  Free Cheese, for example.  Oh, how I wish I’d ever seen that sign.  I live in hope.  Op Shop Open is a particular winner.  But one of my favourites would have to be Historic Cottage This Way.  It doesn’t even need to be a cottage.  An historic anything is pretty awesometastic, in my view, but a cottage is always such a sweet thing.

So when we were driving out to Hurstbridge the other day and I saw a sign beginning with that delightful word Historic, then I knew what we had to do.  We had to keep going to Hurstbridge because I was incredibly hungry and needed to find some lunch.

But on the way back?  Yeah, we followed the sign and found this: 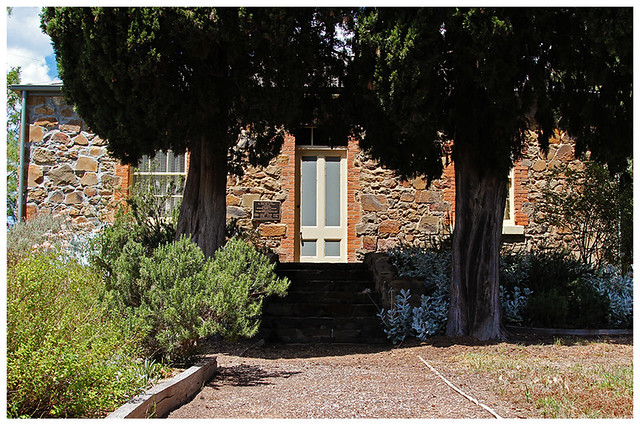 Can you imagine those trees when the cottage was built in 1865?  They would have been tiny little things, neatly guiding your way to the door of this impressive stone cottage.  Now they’ve really gone to town with the whole growing business and tower alarmingly over the little building.

The road to the cottage was a ribbon of gravel that wound its way across a swathe of greenery in the middle of the suburban creep.  The greenery was not there to surround and protect the cottage; no, there’s a hint as to its purpose in one of the photos below. 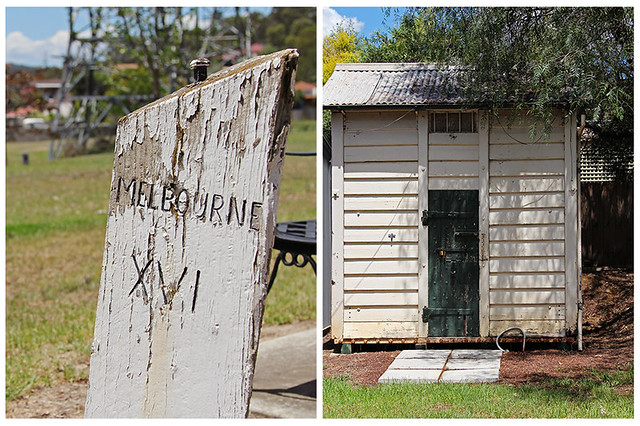 Giant power pylons, marching across the landscape.  The cottage itself is off to the side of the towering pylons, nestled between two modern houses.  In fact, one of the houses faces directly onto the cottage itself, with nothing much in the way of a fence.  I don’t know if I could live that way myself; I’d be too disappointed at the constant reminder that I was living next to a gorgeous old cottage instead of in it.

Of course, I’d also be living next to a chain of giant power pylons, which, along with nearby houses and a giant shed, made it a bit of a challenge to photograph the cottage.  If I stood in just the right spot, however, it came up like this: 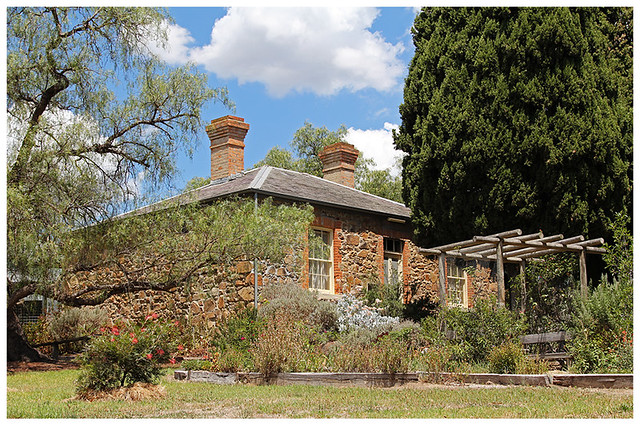 I know it’s a little on the cosy side, but I want it for my very own.  Look at the brickwork framing the windows!  And isn’t the stonework amazing?  Apparently, the fact that it’s built of stone makes it quite rare for the area.  It’s also ensured that Ellis Cottage has survived through a century and a half, still looking as solid as ever. 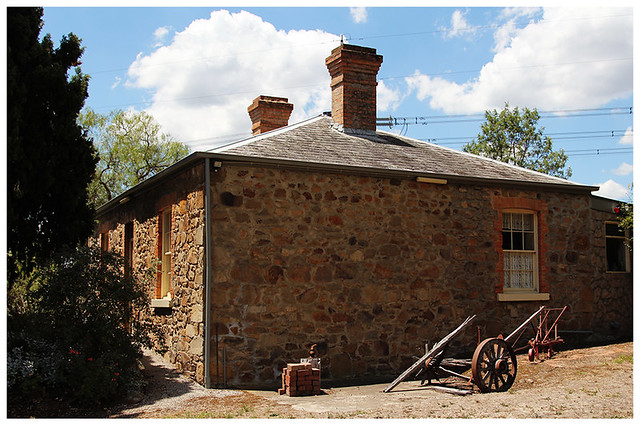 Why yes, I did attempt to hide the giant pylon behind the chimney there.  I actually wish I hadn’t, though; it would have been much better to show the contrast between the elegant old and the less-than-attractive new.  On the up side, I’m quite a fan of the random stack of bricks beside the house.  It really adds a dimension of ‘why the heck is that even there?’ to the otherwise delightful assortment of old tools and carriage parts.

It was a quick stop but I was glad we’d made it.  This is why I believe it’s always worth following those random little signs that start with ‘historic’ – you just never know what you’ll find!  There are fabulous little treasures being concealed by streets you think you know well.  It’s a delightful conspiracy and it just goes to show that you don’t need to go out of your way to make discoveries; there could be one just around the corner from you right now.

The Farm on Churchill Island

The Truth About Band Camp

I want it! But I doubt they’d let me pack it up and move it across the world. Plus, you know, that whole money thing. And the trees would be quite a challenge, too.

For a price, you can have anything you want! But yes, it would be a little harder to pull a pair of trees apart and expect them to go back together again. Besides, it’s mine. Miiiiine!

Alas, “Free Cheese” will probably just keep appearing in our dreams. Then again, one should never give up hope and it would be awesome if you found such a sign! I know I would gain a couple of stone instantaneously by the mere look of it.

I think it is great that the little cottage is kept for posterity. It doesn’t happen very often when a mighty company claim the land. Oh, if these wonderful walls could talk, they would have a lot to say. On the other hand, these treasures hardly need words to express themselves. Take the stack of bricks for example. You are a bit annoyed by its presence, but it makes the experience of the visit more vivid. The guy who started laying those bricks 150 years ago just had a smoke-o and never finished the job. Now the bricks and the visitors wait for him to turn up, 😉

In Sweden we call small trips in the neighbourhood hemester (“semester” (holidays) and “hemma” (at home) = hemester. Clever eh? 🙂

You often find little treasures like these stuck in the middle of new housing developments, although mostly they remain undiscovered amidst the rather blahtastic style of house we have here. In many ways, it was lucky the powerlines were put in right next to the cottage, because it’s given the little place some prominence that it wouldn’t have been granted to it otherwise.

If only they were modern bricks! I’m sure there’s a purpose for them, though.

I absolutely love that the Swedes have a word for these types of adventures! Hemester shall henceforth be adopted into my vocabulary. 😀

I shall now dub you to the Queen of Hemestering! 😀

I will accept this title with pride! Furthermore, I intend to use it to confuse people whenever possible. 😀

Oh my word, that is simply divine! What I’d give to live in a cottage like this. Makes me want to make the trek from Elwood to Hurstbridge soon, too! It’s quite picturesque when the powerlines aren’t in view. Le sigh.

Isn’t it the sweetest? The cottage is open on the first Sunday of every month, too, so I’m planning to come back at some point and have a little wander through. It should be much harder to see the powerlines from inside!