Guess how much my camera weighs.

A lot more than my phone?

Slightly less than a piano?

Actually, if you put my camera body and most versatile lens together, you end up with a device that weighs close on 1.5 kilos.  Is this a fun thing to lug around in my bag?  Not as much as you’d imagine.  And when I didn’t have a blog to feed with photographs, it was a lot easier to say, No, on the whole, I’d rather not sprain my shoulder by carrying that stupidly heavy camera with me on our random adventure today.

Sadly, many a random adventure has come and gone with not a single photograph to show for it.  But not all of them.  And since I am sure at least some people have been vaguely wondering what I’ve been up to this year (at least pretend you have to make me feel better about it), I thought this would be the perfect time to dig out a handful of photos and answer that most compelling of questions: What have I been doing all year?

The year began with the Chef and me paying a visit to friends in Jeeralang, where it is always windy, frequently cold and undeniably beautiful.  At the end of our stay, my friend took us to the shed to endow me with some crocheting cotton and to introduce us to her husband’s restoration project: a Morris van. 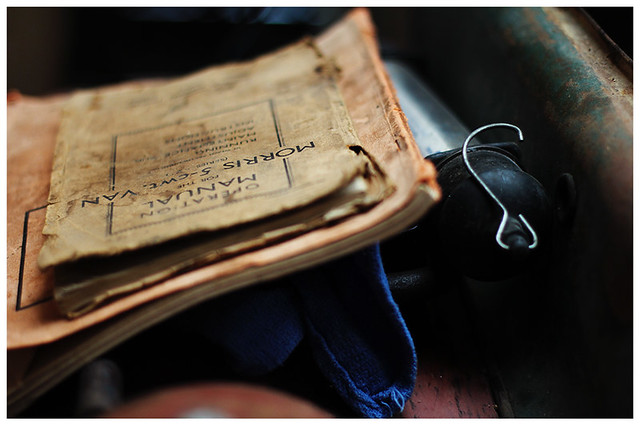 It was crazily dark in the shed, which made for moody photographs.  Just as we were about to head back to the house, we found ourselves trapped in the shed by a surprise torrent of rain.  This would have made for an amazing photograph, if only I’d been quicker to remember that my camera was set up for taking photos in a dark and gloomy shed; these settings lent themselves perfectly to over-exposed photographs of a well-lit rain storm.

Ah well, at least the photos inside the shed turned out as I wanted. 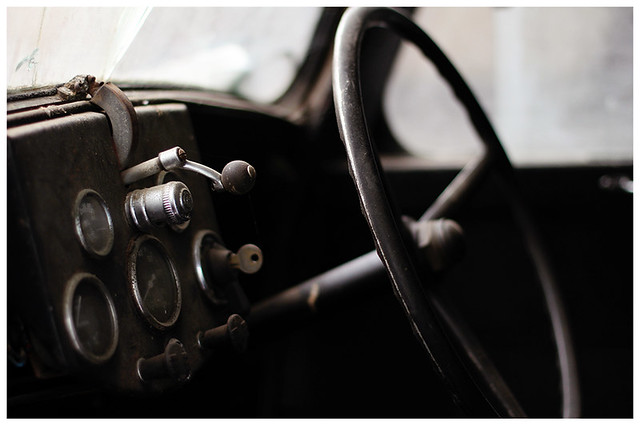 Later in the year, all the staff at my work attended a retreat-type day in absolutely gorgeous surroundings.  I packed my miniature Pentax Q and headed out to be an anti-social photographer at every opportunity, playing to my introverted strengths. 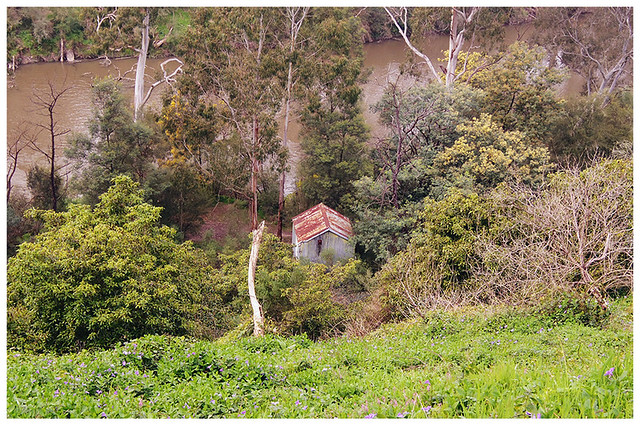 The Yarra is looking a stunning shade of brown there.  I walked down there later (in company – sometimes I can at least pretend to be normal) and believe me, that little house is much more appealing from a distance. 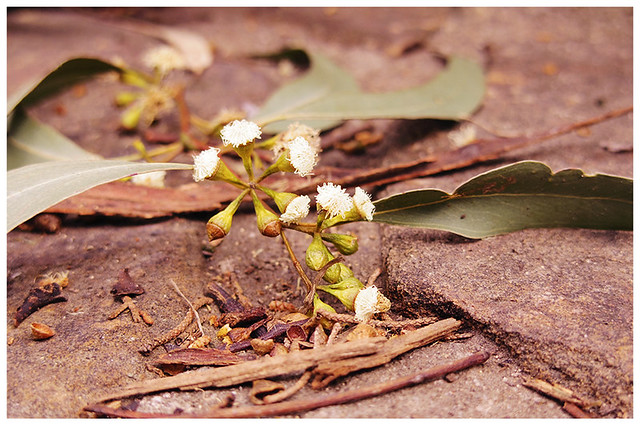 In September, we were visited by giant hail which fell in such volume that it was still lingering in shady pockets the next morning, looking for all the world like drifts of snow.  When it fell in my backyard, it was good enough to arrange itself in artistic fashion, thusly: 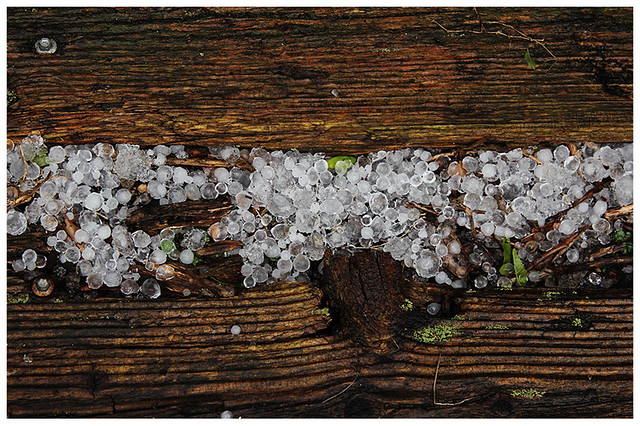 At the start of December, I was part of the band that played for the Maroondah Carols.  As we flutes are in the front row, we decorated our music stands with mint, which was both festive and fragrant. 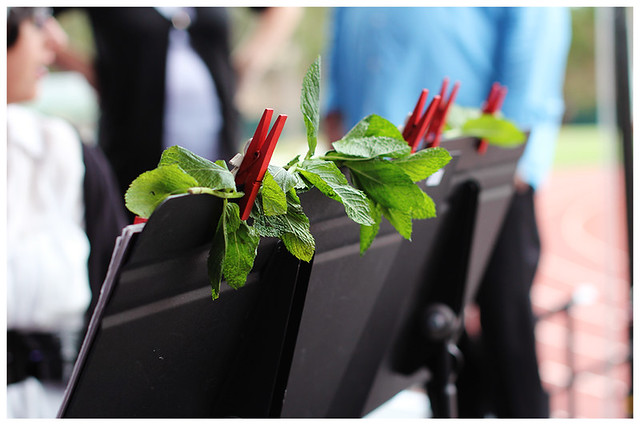 And here is my flute, waiting to go.  Bonus points to anyone who can identify the song there.  Need a hint?  It’s Christmassy.  Helpful, yes? 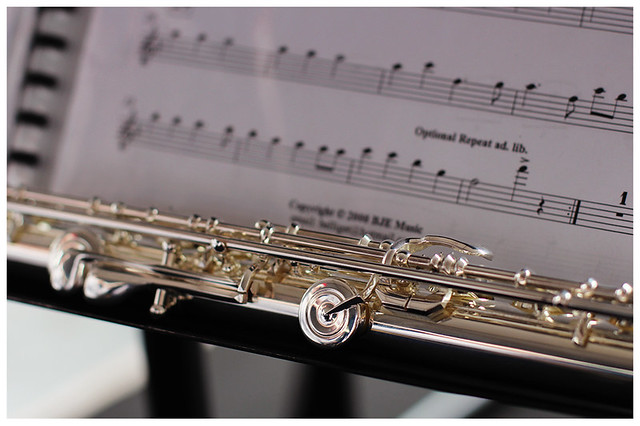 Finally, a photo taken on my phone at the break-up function for my work last Friday.  I was once again off taking photos and playing to my introverted strengths, which no longer bother me the way they used to.  Is there such a thing as introverted pride?  Because I think I might have it. 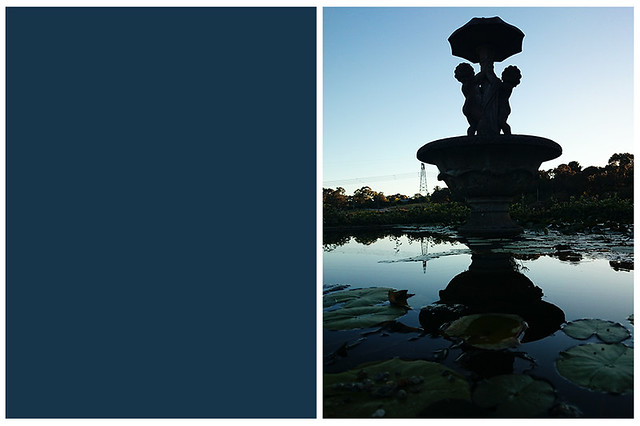 It was a beautiful evening.  Unfortunately, the mosquitoes thought it was lovely, too, and spent a lot of time in close company with my legs.

And that’s some of where I’ve been for 2014.  Next year, I plan to take many more photos so I can plaster my blog with them.  You have been warned!

What has your year looked like?  Share a link to some of your favourite photos for 2014 – I’d love to see them.

Looking through a New Lens

Catching Up and Looking Ahead

The Life of a Camera

I love this post! 🙂 Your photography is awesome, Katie. I look forward to reading your blog in 2015. Merry Christmas and happy new year 🙂 x

Thank-you so much! This made my day. 🙂 Have a lovely Christmas and New Year and may your 2015 be full of lovely things.

It’s almost as though you think about your posts before you write them. 🙂 To the new year!

It’s possible some little part at the back of my mind has been working on it all year without my knowledge. 😀 To the new year indeed! I hope we all have a wonderful 2015.