The Farm on Churchill Island

What’s the one thing better than a working heritage farm?  A working heritage farm… on an island!  And guess what?  There just so happens to be one of those around a ninety minute drive from my house.  As we know from my previous ramblings, a ninety minute drive is a perfectly reasonable distance to travel for a day’s gallivanting with my Chef and my camera, so when the aforementioned Chef had a day off, guess where we went?

Thanks to my working Monday to Friday and the Chef constantly being rostered on both weekend days, it’s been ages since we’d been on a silly adventure.  Huzzah for working in a school, I say.  With four weeks off, I finally had a chance to spend some time with the Chef.  We were distracted by a few op shops on the way in (including this ridiculously adorable one), but we made it at last, driving across the one lane bridge to the farm on an island of its own. 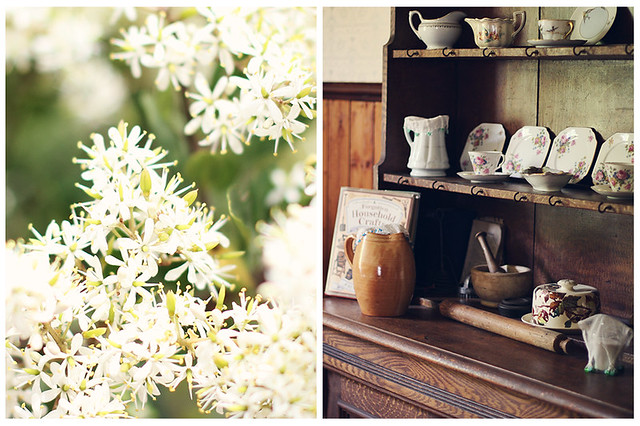 I would also like to transplant that dresser directly into my kitchen.  Not my current one, because then we’d be faced with the problem of deciding if we want the dresser in the kitchen or ourselves.  And I’m afraid that a photogenic dresser would be absolute rubbish at cooking or doing the dishes.

Now, have I mentioned the wallpaper yet? 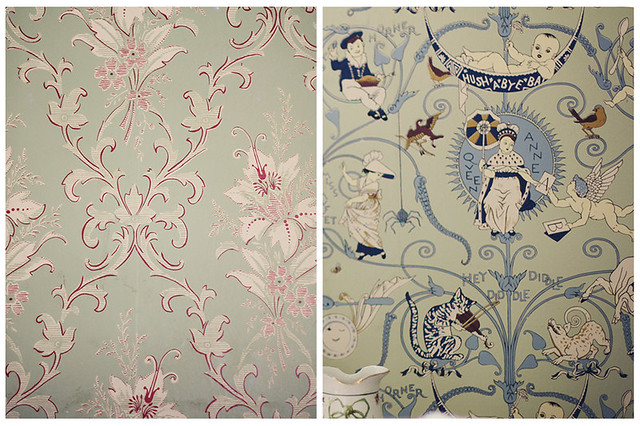 Wallpaper.  And there was more of this in every room.  Obviously.

At this point, I should mention my favourite part of Churchill Island was the ability to take photos of the gorgeousness.  So many places won’t let you take photos, which I feel is a little short-sighted.  No-one’s going to come if they don’t know the walls are covered in the maddest of historically accurate Victorian wallpapers (and trust me, these are nothing compared with the ones I couldn’t photograph at Black Rock House). 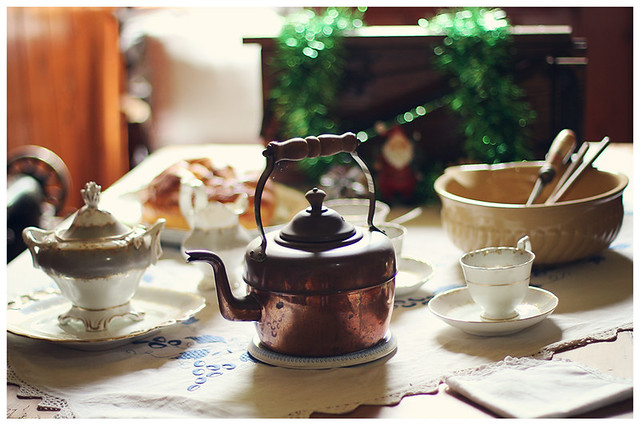 A touch of Christmas in the background. 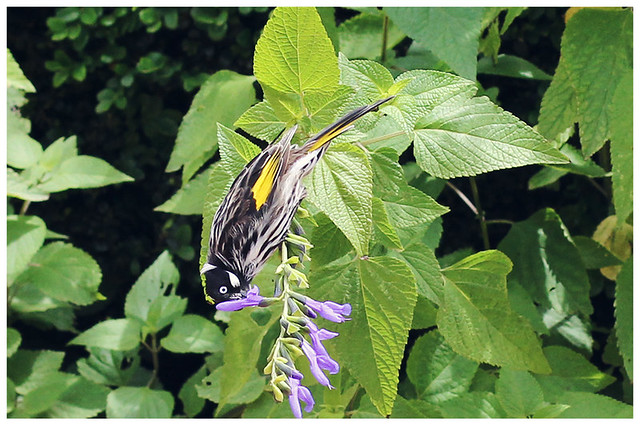 One of the good things about the Chef is that he notices things.  There I am, randomly trying to take arty photos of gardens through silhouetted window panes when he’s trying to draw my attention to things that are actually interesting.  Such as this New Holland Honeyeater.  In other news: the purple flowers are apparently delicious. 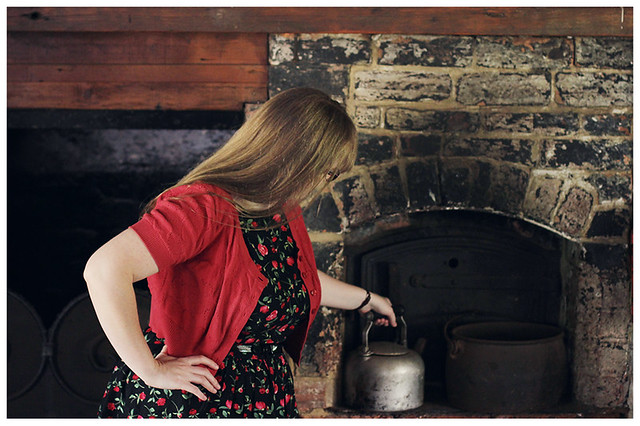 Touring a heritage farm is thirsty business.  I’ll just check if the kettle’s boiled and we’ll have some tea. 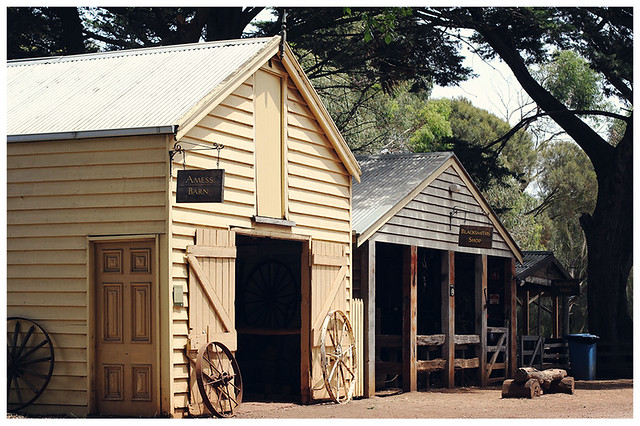 From the photo above, you might assume we had the place to ourselves, allowing us to wander around freely.

Hahahaha, no.  We were visiting a tourist attraction in the middle of the Summer holidays.  It was packed with families.  I had to wait roughly half a lifetime before there were no people visible in the little setting above. 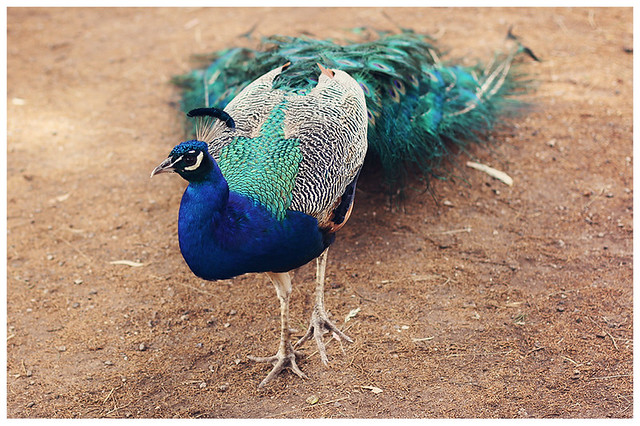 There were two peacocks strutting around with their tails on display, but apparently, this is the best it can do for me.  Well, you know what?  Anyone can get a photo of a peacock with its tail up; I like to look for the more casual peacock.

Because then there’s this turkey below… 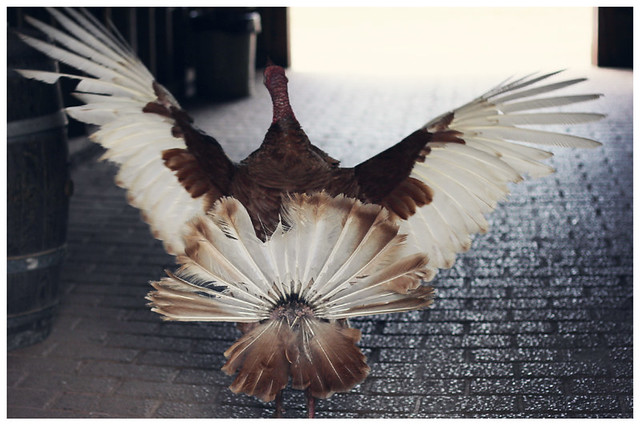 I’m still not sure if this gesture says ‘follow me’ or ‘get the blazes out of my barn’.  Either way, it’s been captured for posterity.  We followed him regardless.  He didn’t seem to mind. 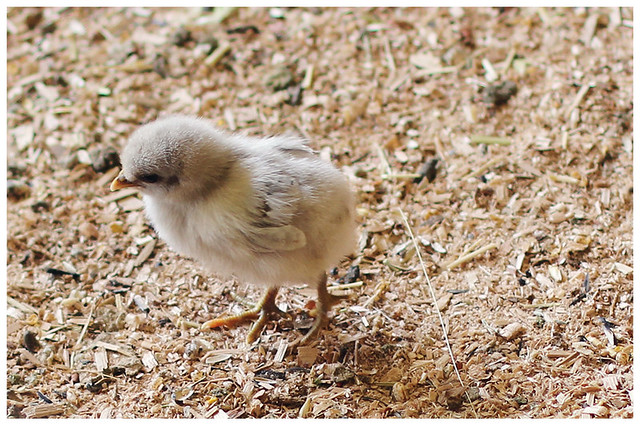 I just want to make ridiculous squeeing noises every time I see this photo.  Argh, it’s such a gorgeous little handful of fluff.  I wanted to put it in my pocket and take it home but the Chef said no, we were going to steal the ducklings instead. 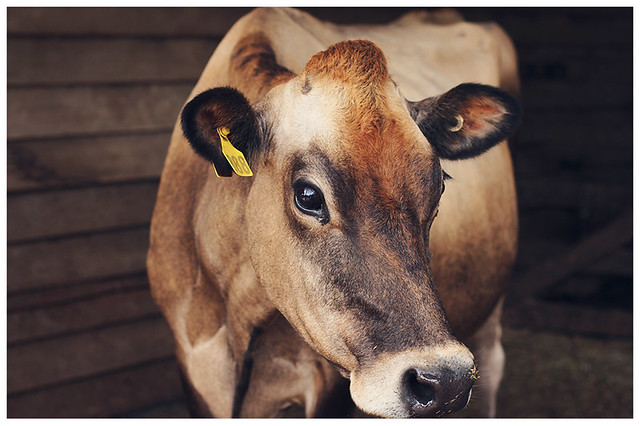 We wandered back to look through the other rooms of the farmhouse, we were found… creepy mannequins. 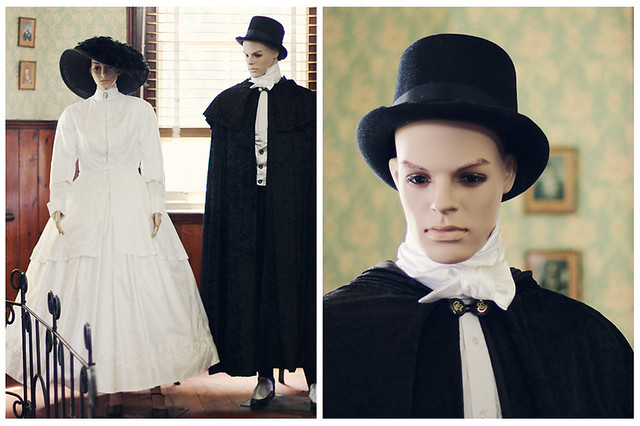 If you’re new to my ramblings, you won’t know this, but I am constantly plauged by creepy mannequins.  They haunt me wherever I go and there’s always something a little different each time.  In this case, the Chef said what I know we’re all thinking: That one’s a vampire.  Yes.  Yes, he is.  A vampire mannequin.  Look at him, gazing in predatory desire at the lady mannequin.  I vant to ineffectually attack your plastic neck…  No wonder the lady in white has that expression of resigned horror on her face. 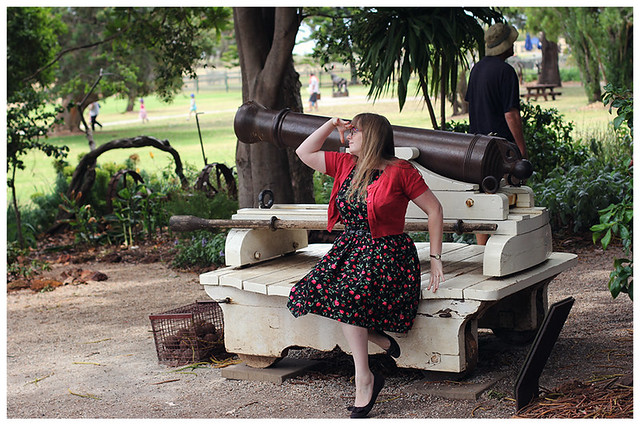 Nothing, however, explains the cannon.  Were they really expecting attack?  Should I have read the explanatory history display before we wandered through the farm?  Possibly…  I’m just not sure why the cannon is even there in such an ineffectual place.

I’m also not sure what my pose is about here.  Am I looking for people to shoot cannonballs at?  Trying to spot the sea through the swarms of tourists?  Who knows.  While we’re here, bonus points to the guy dithering in the background there.  If you’re going to ruin my shot, at least do it in a place where I can crop you out.

It was such fun to go on an adventure again, although I feel a bit rusty.  Clearly, this is a sign that we need to do it more often, if only so I can work on my silly poses.

Thanks, I Made it Myself!

The Cottage under the Powerlines

The Consolations of Canelé

I’ve only been to the farmer’s market on Churchill Island – I should go back some time and tour the rest of it! I’ve been to the Kongwak market too – smaller but also lovely.

It’s definitely worth a visit for the farm and the homestead. If you can time it so the market’s on at the same time, that would be a bit of a win, really.

Oh my, this farm is breathtaking! I think we must take a trip down ourselves. Perks of uni students – can go when schools return!
Your outfit is darling, too! And that dresser, oh that dresser.

It is a highly recommended daytrip! The only thing you might need to watch out for is a school excursion, otherwise you should have time for a leisurely wander through the place, not to mention two peacocks to yourselves.

And thank-you – that’s the second dress I ever made and I love it. 😀

Totally gorgeous photos Katie! Love the new holland pic, one of my fav local birds – well spotted! We had a family holiday to Philip Island a few years ago & visited the farm on Churchill island, great set up. I remember showing the kids all the farming tools, &I’m pretty sure we had to check their pockets for ducklings before we left…
i don’t recall the scary mannequins – (just as well or the youngest would have had nightmares) but you are right, that dude is seriously creepy looking!

The mannequins are my special curse. I bet you they were taken away for repairs or something right after our visit.

We used to have a lot of visiting New Hollands in the house where I grew up, so it was lovely to see one again. I love the crazy white eyes – it’s keeping an eye on us while still enjoying some deliciousness.

Fantastic pictures as always, credits to you and the Chef!

I love all of your posts, obviously, but your roadtrip adventures have become a bit of a favourite actually. So many places I want to go to myself and this is definitely one of them.If only they tie up the cows and get the poultry inside an enclosure, I am all right. I was chased by a peacock during a holiday in Denmark when I was a kid. Mum and I spent the time in the car doing crosswords while my sister and dad went to see an awesome mansion and a garden out of the ordinary. I was really angry when I saw the photos afterwards, beacause I would have loved to see it myself.

Aww, those ducklings are so cute! 😀 The cats would certainly have had a blast if you brought those back home.

One thing you do need to work on is your silly poses, maybe you are a bit rusty. I’m really sorry to say this, perhaps I am brutally honest and perhaps I’ll ruin your day, but you look just great! There, I have said it. However, I am sure the silly poses will keep improving on further roadtrips. 😉

That’s so lovely to hear – I’m glad to be providing entertainment and inspiration all at the same time (and while having a great time myself). Although I must say, I was saddened to hear how peacocks ruined your day out as a child. They are such huge birds that it’s easy to imagine them scaring you when you were little.

I need so much work on my silly poses! More roadtrips will mean more practice, so I guess it’s the only way. 😀

Yeah, that part of the journey was a complete dud, but if I can jog my memory a bit and recall the name of the mansion I’d like to go back there if the garden is still available to the public.

I’ve missed reading your travel stories. Though I’m still impatiently awaiting The Return of the Failboats.

Thanks! Also, good news: I have just returned from a Failboats weekend!

[…] less going on a daytrip every workday, even if it is the same one. Our last proper daytrip was to Churchill Island at the start of […]